Allow me to paint a picture for you. It is the second week of May, you and your rescue dog of two weeks are walking down the sidewalk near your apartment. The sun is shining, there’s light traffic, the temperature is perfect (not too hot or cold), and you’re strolling along. A man is walking in your direction and two kids are coming up from behind you riding skateboards. BAM! The next thing you know, your new mutt has crawled underneath a parked car on the side of the road.

He is convinced the world is going to eat him and that Honda Civic is his last saving grace. Coaxing him out isn’t working, you can’t bribe him out because he’s too scared to eat in public. So a dog mom does what she has to do and drags him out from underneath the car by the scruff of his neck.

In that moment, you replay in your head all the things the rescue said about your dog. “He’s shy.” “He is scared.” “He’s a runner, make sure you watch when you open your car door.” “He may take awhile to adjust.”

I felt like a failure. I couldn’t see the light at the end of the tunnel, at this point digging to China would be quicker. All I knew in that moment was that Emmett was terrified of EVERYTHING around him and I didn’t have the knowledge to help him. 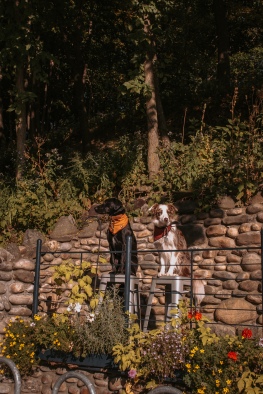 I was familiar with prong collars from using them with my parent’s dogs. I just didn’t think you should put one on a dog that was this terrified of everything. I, wrongly, assumed the negative association of the prong collar would worsen his fear of his surroundings.

But Emmett had to be walked, safely walked, so I decided to give it a try. As with my parent’s dogs, the change was instantaneous. All pulling ceased. Emmett walked by my side in a heel position, and after a few walks in it, he began to look to me for direction when he got scared.

All in all, the use of a prong collar changed Emmett’s life.

A prong collar, also called a pinch collar, is quite simple in nature. It works based off of pressure. When your dog pulls against the leash, the prongs pinch the dogs neck, applying an uncomfortable pressure. When your dog moves in a way that relieves that tension on the leash, the pressure from the prong disappears. Dog’s are smart and pick up on this almost instantly.

Discomfort is the word I choose to use when describing the prong sensation because that is all it feels like. If you put one around your neck and apply pressure, you feel discomfort. It does not hurt.

When a dog pulls in a flat collar or martingale, all of the pressure is on the front of the neck, specifically the trachea. This is what causes a dog to cough and wheeze when walking. A prong collar does not have this affect because the prongs are lifted off and pressure is distributed equally around the entire neck.

A correction in a prong collar is a quick reminder to not pull, not lunge, or not growl at another dog. It is a way of reliably communicating to your dog in every situation verses your dog choosing when to listen to you.

I want to say that again. A prong collar is a tool for communicating with your dog. That is why it effectively works on a scared dog like Emmett.

When he gets nervous and goes to dive under something, the prong correction says “No, don’t do that.” When Emmett is walking in the correct place at my side, the lack of pressure from the prong encourages the good behavior.

Is a prong collar for you? I think 99% of the time my answer is yes. If you have a dog who pulls while walking, I truly believe any harness or collar you buy will never work as simply and effectively as a prong collar.

As a person who used to view prong collars as “mean”, I have completely changed my view point. They are one of the most effective dog training tools you can buy. Maybe second only to an e-collar (another post for another day). I would argue that they are the most straight forward training tool you can use.

There is a mindset of training that I have developed from using a prong collar. I correct wrong behavior and reward good behavior (yet another post for another day).

Let me paint you a parting picture. It’s September, you’ve had your rescue dog for about a year and a half. You’re strolling to the Farmer’s Market in your downtown. There are people, vendors, strollers, and children galore.

Next to you, your rescue dog, faithful downtown companion is strolling along. He is nervous but not pulling. There is no darting, no hiding. He looks around and glances up to you often, looking for direction. He still won’t take a treat from you in public. But he knows he is doing what is expected of him because you are communicating that through the prong collar he wears. You are happy, your dog isn’t diving under any Hondas, and there is ice cream in it for both of you.